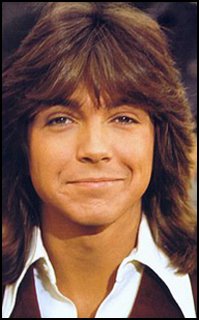 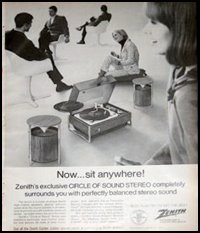 We moved into a ranch house out where North County literally ends at the Missouri River. We might as well have been living in a little house on the prairie, as far as my thoroughly-citified Mom was concerned. Dad was blissfully happy to be closer to his farmer dreams. I was ecstatic, for I got a strawberry roan Shetland pony named Sugar (“ride a painted pony, let the spinning wheel spin”) and a dog named Trouble.

Also, the largest room in the house became my bedroom. It was once 2 small rooms, but with the wall knocked out I had a bedroom chamber as well as a recreation room. Since the other areas of the house were so small, they put the stereo in my room. I was now left alone with a Zenith “Circle of Sound” stereo system and all my parents’ albums. I quickly plowed through all of Barb’s musical soundtrack albums and Dad’s “make-out” music. I especially loved the stack of 45s and 78s, and then there was one record that had to be played at 16 RPM, featuring Barb singing “Lonely Wine.” I was memorized at hearing her husky singing voice coming from the speakers; my Mom was a music star!

Having taken command of the stereophonic world, new vistas opened before me, but Dorothy’s black & white shack was just about to land in Technicolor Oz.

My Pop Life officially began with the Partridge Family . The musical milestone started when Barb bought me the Partridge’s debut album at K-Mart. This was the first piece of vinyl that was exclusively mine, and was the welcome mat before the door of a new world…the world of pop and rock & roll, of fandom, of posters on the wall and a green wiffle ball bat turning into a guitar. The sound the world’s doorbell made when this fledgling music junkie pressed it was “Ba ba ba ba/ba ba ba ba baaah…Hey, I think I love you.” So let it be said that David Cassidy was the goal post of my cultural kick-off.

The Partridge Family Album was better than a teddy bear, and I abused it as if it were one. Ballpoint pen and Magic Marker decorated the covers, and interstate systems were etched into the vinyl from overzealous phonograph needle manipulation. I loved the music, certainly, but there was an added religious fervor due to this being my first multimedia experience. I need not spend a single moment without the Partridge Family! David Cassidy could be with me always….and he was. The faux-wood panel walls surrounding my bed were plastered with his gorgeous face. He watched over me as I furiously read every detail of his existence in such highly-factual periodicals as 16 and Tiger Beat. I spent every Friday night watching David and his “family” create scenarios that allowed them to play songs. When the episode was over, I could run to my room and play the featured song repeatedly, pretending to be “Keith’s” bassist brother “Danny,” and work myself into a tornadic lather until I collapsed into bed.

But it got even better! The rest of the world soon understood how monumental David Cassidy was when he (and OK, the Partridge’s, too) could soon be heard coming over the radio! Yes, the radio…what was once something that my parent’s had on in the background was now a direct connection to the outside Partridge world. The radio never played enough David, but luckily I had the album and could get as much as I wanted. I was now acutely aware of the importance of radio, the variety of radio stations available, and only the stations that played David, and similar pop tunes, mattered.

Email ThisBlogThis!Share to TwitterShare to FacebookShare to Pinterest
Labels: 1970, david cassidy, i think i love you, the partridge family

Ah, October, 1970. I was one month shy of turning 12. I don't think I bought the Partridge Family Album immediately - I seem to remember spending lots of time in the record departments of E.J. Korvette's and Sears listening to it spin, a process I perfected the next year when Carole King's Tapestry came out.

But, I loved that TV show from the beginning, and my music fandom began there, too. I bought all the Tiger Beats and 16s (which just wasn't done by boys, but I worshipped David and Bobby and Donny and Michael, too; I was confused by the occasional love shown for pretty boy actors who didn't even sing, though).

"I Think I Love You" was the first record that I spent all my time thinking about, singing it, analyzing it (in my 12-year-old completely emotional way; I suspect there were five or six girls in succession that I made that song the soundtrack for my crushes).

I remember taking a family vacation sometime during the course of that first TV season, and being astoundingly upset when a Friday night was spent in a two-bit motel somewhere in Pennsylvania with only two TV channels, neither one of which was ABC. Oh, did I throw a fit missing the Partridge Family.