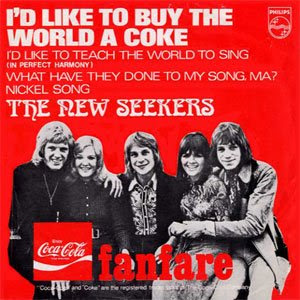 Previously, the parents had it on in the background - and aside from Batman - it couldn't compete with some of my better toys. But keeping up with new episodes of The Partridge Family and The Brady Bunch got me into the weekly routine, and soon, each day became a smorgasbord of viewing options. It was one of the few fun things to do that had full adult approval.

I finally mastered “telling time” because of TV shows. Early morning: when The Lone Ranger and Fury were over it was time for one of the parents to drive me to Conine’s so they could get to work. Start the morning with Sesame Street. Mid-morning snack with I Love Lucy or Electric Company, and then my choice of game shows until the afternoon blitz of Ultraman and Johnny Socko’s Robot. A parent would pick me up before Walter Cronkite could get too deep into whatever it was he was going on about. The TV was just as good as a clock.

TV ads hipped me to a wider world of stuff. The ads in 16 and Tiger Beat magazines were selling David Cassidy stuff, the ads on TV were selling different stuff. Some I recognized, but many were new mysteries, like pantyhose inside a plastic egg (is this an Easter thing?) and a dog chasing a horse-drawn wagon that disappears into a kitchen cabinet. Freaky stuff.

TV ads had special music - short, easy to remember ditties that went with the images. For instance, a rainbow assortment of people singing “I’d like to buy the world a Coke and keep it company… what the world wants today is the real thing, Coca-Cola.”

Cross-promotional music was a mind-bending discovery at the time, and I haven’t really ever made solid peace with it, even though there’s been 4 decades to get used to it. And Coca-Cola continued to meld radio and TV, confusing me a year later with Dottie West’s “Country Sunshine,” and making me worry about what they might do to Donna Fargo's "Funny Face."

I was glad that ours was an RC Cola house.

Email ThisBlogThis!Share to TwitterShare to FacebookShare to Pinterest
Labels: 1972, i'd like to teach the world to sing, johnny socko's robot, the new seekers, ultraman