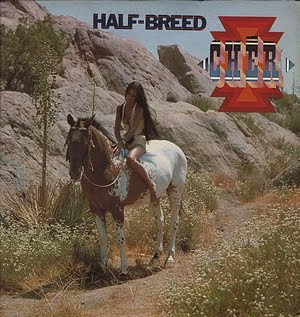 With one song, Cher made me switch sides from wanting to be a cowgirl to wishing I was an Indian maiden with the floor-length headdress like the one she wore while singing the song on The Sonny & Cher Show. I still want that headdress, and I’ve come close to it a couple of times: the Cher half breed doll and being invited to portray an Indian in a music video.

Cher performed the song on horseback, and I, too, could sing it on horseback…well, technically, on the back of my Shetland pony. But since she was short, there might be a problem with the feathers dragging on the ground. And there was one other technical glitch with executing this idea: Sugar had recently given birth, so was busy nursing a little one.

Yes, that public moment of copulation with Billy Blue Blazes did result in an exquisite little colt my Father named Star. Yes, Sugar gestated for about 370 days, which is not all that unusual.

During the separation, my Dad had shipped the pregnant Sugar from our paddock on Douglas Road to the ranch of Art and Ann Klein in Brighton, Illinois. Art and Ann were the couple who gave me the red cowgirl outfit, so this (and about 10 acres of fenced pasture) made them the perfect adoptive parents for Sugar.

I was enchanted by the little colt, and thrilled to see Sugar every now and then, but because it was every now and then, it felt more like visiting a petting zoo than spending time with my pony and colt. Sometime later when Dad sold the pair to a co-worker living in Troy, MO, it registered nowhere near the sadness he expected upon telling me the news. I had to pretend to be sad just to match his expectations. There was no way for him to understand, or me to explain, that I had a callused heart from having lost Sugar – among many other things – in September of 1972, and that I was just happy that some big, happy family would now love and play with my pony.

Email ThisBlogThis!Share to TwitterShare to FacebookShare to Pinterest
Labels: 1973, cher, half-breed, the sonny and cher show