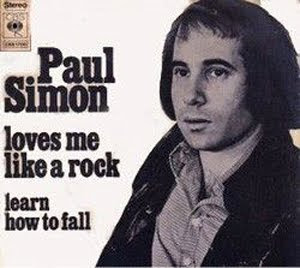 My Mother begins dating a man named Dale, who has a modified version of Charlie Rich's hair, drinks too much, drives too fast and smells of Old Spice (with a Cutty Sark top note). He also has a skinny blonde son named Jeff, who is the same age as me.

Jeff was a deeply morose little guy because his mother had died the previous year. I was angry because I’d “lost” my father around the same time. When we had to hang out together, it always felt like we should have had a connection but something key was missing. Now I realize that if we’d been adults, we’d have spent our time together moaning about how life sucks over way too many cocktails and bonding for life. But as it stood, I was full of piss and vinegar while he was mopey and lethargic, and that was an uncomfortable combination.
See Paul Simon perform "Loves Me Like A Rock."
.
at 2/06/2010