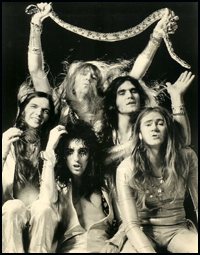 Looking back, it’s shocking to realize how much of my early record collection came off the backs of cereal boxes. How wondrous it was to have vinyl (albeit low grade) stamped onto cardboard, waiting the hasty draining of the contents in order to spin. The ceremony of using “the big scissors” to oh-so-carefully cut the 45 out of the back of the box, and then watch it flop on the turntable like a landed fish was just as important as discovering that the Scooby Doo boys & girls sang! And they sounded a lot like Josie & the Pussycats! How strange.

Along with the toy surprise inside, cereal box tops were the kiddie equivalent of Green Stamps. Super Sugar Crisp promised that they would send me an 11x17 black & white poster of David Cassidy if I sent them 4 box tops. I did, and they were good for their word. A short time later, a large manila envelope addressed to me arrived in the mail, and I ripped it open with a frenzy that only the promise of a David poster could conjure.

Sure enough, there he was; simply gorgeous. Oh, and there’s more posters. Honey bear sure gave bang for the box top buck. There were a total of 5 posters: David, Jackson 5, the Osmonds, Bobby Sherman and… what in the world is this?!?!?!?!

It was a picture of an ugly crew of long-haired dirty creeps surrounding a skinny, beak-nosed monster with warped raccoon eyes. It was so ugly that I had to look away and just sneak peaks at it. It freaked me out, bad. I was able to look at it long enough to see the poster was labeled “The Alice Cooper Band.”

I was perplexed as to how something this gross could have invaded my David Cassidy world. Then it hit me in a flash: My Parents Can Not See This! Or rather, they can’t see that I have this! I ripped the poster to shreds, and threw it in the trash can. But then I doubled-back and actually lifted up a layer of garbage to bury the shreds deep within. I had to spare us all from the horror.

5 year old me would have run in horror, but adult me knows this is fierce:
The Alice Cooper Band - "Is It My Body
.