March 1973: VICKI LAWRENCE - The Night The Lights Went Out In Georgia 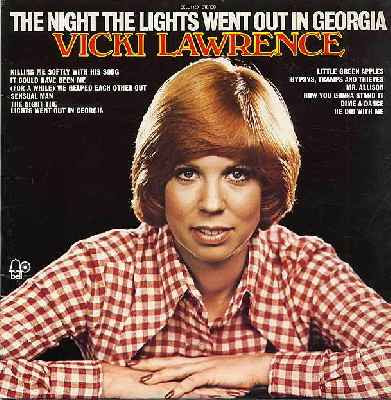 Alongside the radio, variety show television was how we heard new songs, and the power of a TV star singing a song (hello, Cher!) could not be ignored.

The Carol Burnett Show was like a religious service in our home, so when one of its stars – Vicki Lawrence – put out the single “The Night The Lights Went Out In Georgia,” it was mandatory that I own it. Plus, the single was on the Bell label, so this was a no-brainer.

Luckily, I loved the song, playing it over and over again, trying to figure out the story line. No matter how hard I concentrated, I’d get confused by the plot: murder, multiple infidelities, and corrupt judges… hard for a 7-year old to keep it straight. But all this confusion and misunderstanding just added to the allure, and that chorus was undeniable!

Things got even more intriguing when two teenagers in the apartment complex overheard me singing the song while out riding my bike. Jackie and Janel stopped me to ask if I knew “what that song means.” I was too thrilled to have junior high kids purposely talking to me to give an intelligible response, but it didn’t matter, because they started talking animatedly between themselves about plot points, and “pot” and getting in trouble for sneaking off with boys.

I asked a question about this last point, and they came back to the reality of talking in front of a dumb grade schooler and went silent, staring at me. Finally, Janel said, “This song has real deep meaning for me, and I can’t tell you why. It’s a secret. And you wouldn’t even understand if I told you.”

With that, Jackie and Janel looked at each other and began laughing uproariously as they walked away from me. This sent me back home for a few more listens to the song, trying to unlock Janel’s secret… did she kill someone? From then on, I stayed far away from those two, but watched Janel with a cautious eye because, well, what if she was a murderer?
Hear the song.
.
at 1/09/2010

Email ThisBlogThis!Share to TwitterShare to FacebookShare to Pinterest
Labels: 1973, cher, the night the lights went out in georgia, vicki lawrence

Your "Cher" reference is anything but gratuitous, considering that the song was first pitched to Cher, but Sonny gave a thumbs-down, so as not to offend any Georgians, or Southerners in general.