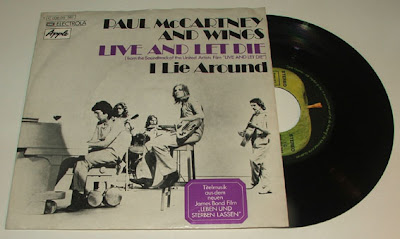 Considering my age, I knew more about the solo Paul McCartney work than his legacy as a Beatle. In essence, I was unencumbered by the weight of his history, so I just took his solo work at face value, and was very happy with it. And his song “Live and Let Die” allowed me to work off a lot of steam.

In this month, I got two disturbing pieces of news.

#1: My Mother had to break the news that my Father had married Joy. This meant that when I went for a weekend visitation to their one-bedroom apartment in Ferguson, I had to be nice to wife #3.

Oh, she tried to win me over, plying me with macaroni and cheese and popsicles, but she felt more like an obstruction between me and my Dad. And it was especially confusing when he started talking about how I could come live with them – wouldn’t that be fun? But since I had to sleep on a fold-out cot in their living room, I didn’t think doing this full-time would be all that fun. And I noted that Joy never joined in these “come live with us” monologues, since they always happened when she wasn’t around.

#2: My Mother had procured me a babysitter, a place I could stay before and after school, as I was about to start 2nd grade.

Previously, I’d been staying with a lady named Linda, who was in the same apartment building as ours, so it was familiar surroundings. And even though Linda had me drinking powdered milk (ewwwww!), she also introduced me to making Charlie Brown Christmas ornaments out of dough that was baked solid in the oven, so she was cool.

But now I’d be staying with a lady – Shirley - who lived in Seven Hills, a subdivision about a quarter mile away from the apartments. This meant I’d be walking in the opposite direction after school, and would be in a new setting with her 3 kids, Kim, Lisa and Brian. I noted that Shirley had a little dog, which was a bonus, but not enough of a bonus to keep me from reacting badly to this change of plans.

Which is where Paul McCartney came in handy. He made me feel better when he sang, “But if this ever changing world in which we live in makes you give in and cry/Say live and let die.” Never underestimate the therapeutic qualities of good melodrama.