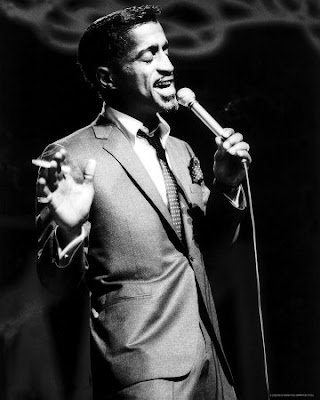 The timing couldn’t have been better with this song. It’s Easter time and the airwaves are full of an infectious tune about a man covering things in chocolate and making the world taste good. I still believed in the Easter Bunny, and figured if that cool, cool rabbit could sing, he’d sound much like Sammy.

Easter meant an egg hunt first thing out of bed, and then we left the ranch to go to the city to see both of my grandmas, who gave me lots of candy and a paddle ball. Nothing better than getting all hopped up on malted milk and chocolate eggs and thwacking a rubber ball against plywood until either the rubber band snapped or the folks did.

So, that was the anticipation, the hope based on former Easter’s, but it all went a bit odd on Easter Eve. My Mother rolled up two pin curls on either side of my face, held down with metal clamps that felt weird while awake, and made it nearly impossible to sleep. But I went along with it because she said it would make my hair look just as nice as my new Easter dress.

On Sunday morning, she undid the pin curls, combed out my hair and it felt weird. Then I checked the mirror and I looked horrible! There was no convincing me otherwise, and I could barely hear them say so over my constant wails as I ran around my bedroom. This hairdo was ruining everything.

To get me out of the house, Mother said I could wear my white fur hat which would probably flatten those curls a bit.

It did not. And because those concrete curls wouldn’t budge, neither did the hat from my head. I wore it for the car rides, through church, through paddle ball… which created a fair bit of bratty kid tension for the family. Mother dealt with it by taking a picture of me pouting in the back seat of our fire engine red station wagon. 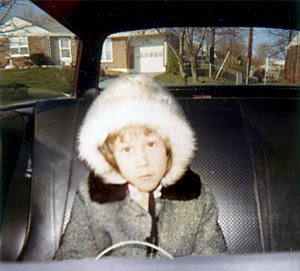 The minute we got back home, I removed the hat, put on my play clothes and literally dive-bombed into Trouble’s dog house, hoping a good canine roll in the dirt would make that hairdo disappear so we could separate the sorrow and collect up all the cream.