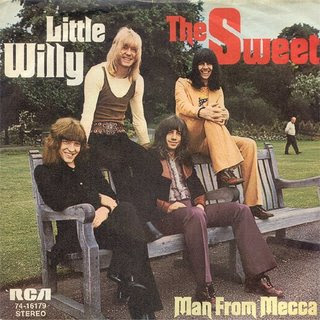 Oh yes, one’s first vinyl LP is a major milestone, but nothing is sweeter than being introduced to the immediate pop gratification of singles.

Once again, Kmart was the place where a vinyl addiction took seed. Mom let me pick out any song I wanted, and the selection of this 45 rpm actually had more to do with the familiar gray and black Bell Records label (hello, Partridge Family) showing through the round cut-out of the single jacket than it did with an urgent need to possess this song. But it was a great choice; I played the crap out of this raucous single, and it brought about my first experience with musical criticism.

The B-Side to “Little Willy” was “Man From Mecca.” Musically, I found it crude and boring, while lyrically, I couldn’t think of anything more stupid than lines such as, “Like a white mouse hiding in a house.” Note that the B-side was written by the band, while the A-side was by Chinn & Chapman, the latter of whom would be part of another musical explosion in my world, before the decade ended. Here's a bit more about The Sweet experience.

Email ThisBlogThis!Share to TwitterShare to FacebookShare to Pinterest
Labels: 1972, chinn and chapman, little willy, man from mecca, the sweet