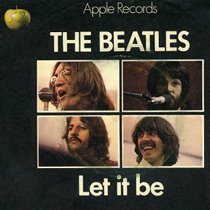 One afternoon while sitting on the couch intently watching Johnny Socko’s Robot on television, the front door slams open, and Melba roars into the room. She slams the door behind her, and leans back against it as if punched in the gut. Her Northland Cinema usherette uniform heaves with her every deep breath. She finally notices me starring at her quizzically and cries: “THE BEATLES BROKE UP!”

She screamed, stamped her feet and ran from the room in a hurricane of tears. I remained on the couch, staring intently out the window, deep in thought:
What exactly does “breaking up” mean?
What does that have to do with The Beatles?
I hear The Beatles every single day, and just ‘cos they “broke up,” it’s not like they’ll yank them from the radio.
Santa Claus is seen only once a year, but he exists all year long.
Santa will always exist, so will The Beatles.
They won't just disappear into nothing, right?

Looking back, April 10th, 1970 was also the date of my very first Existential Musical Thought.

Pertinent bits from the film Let It Be.
.