January 1971: THE PARTRIDGE FAMILY - Up To Date 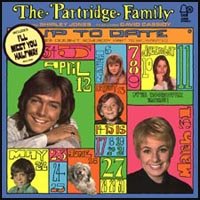 The Partridge Family released another album! Today, as I look at my battered copy of Up To Date, I realize I must have crossed over into a new level of musical maturity. The only writing on the album cover is “Toby W.” written in the top right-hand corner by Mom, which is what had to be done to make sure you didn’t lose your records when taking them back and forth to listening parties. I did not scribble mercilessly all over it with magic markers. I treated it with proper respect.

This album was so much better than the debut. My 5-year old ears immediately noticed that the songs were much more solid and mature, and I liked all of them (whereas I had to skip over half the songs on the debut LP simply because David wasn’t singing). I have never stopped loving this album, and I actually get pissed when David Cassidy slams the Partridge music as useless crap. The songs written by Tony Romeo and Wes Farrell are as valid as the Top 40 Big Pop Extravaganzas that filled popular radio at the time. Wes Farrell’s “Wall Of Sound”-lite was made legitimate by a heaping handful of Phil Spector’s session players (hello, Hal Blaine!).

If, say, B.J. Thomas had recorded “You Are Always On My Mind,” or if Tom Jones had taken a crack at “I’m Here, You’re Here,” there’d be much less lingering prejudice against these songs. All songs can easily be divorced from their context and analyzed by its components, which is why there are so many cover tunes in the world. And I’d love to hear current-day Bob Dylan cover the Partridge’s “That’ll Be The Day.”

Email ThisBlogThis!Share to TwitterShare to FacebookShare to Pinterest
Labels: 1971, david cassidy, the partridge family, up to date