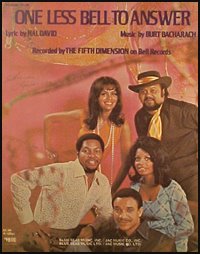 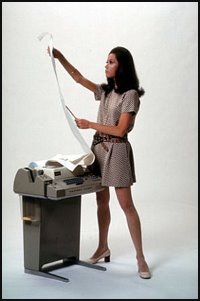 Now here was a “grown up” song that I could get with. I was intrigued by the sound and the mood of the song, and it made me realize just how much I enjoyed the 5th Dimension. Their songs always sounded so warm and energetic coming over the airwaves, and seeing them on variety shows only reinforced this view. To later realize that this particular song came from Burt Bacharach & Hal David just sweetened the deal.

I was also intrigued that they were black, but no one seemed to have a problem with that. Because Black was a problem in my house; Dad didn’t like Blacks (or Jews), and was eager to share the many reasons why he didn’t like them. So, I was now aware of racial differences, but didn’t quite understand how having a different skin color than my own was an automatic detriment. And I was stumbling over Dad’s racial inconsistencies. If Black was bad, then the 5th Dimension should cause him a problem, but he didn’t have any opinion about them, which must have meant he was OK with them? Or at least he didn’t hate them, and seriously, how could anyone hate the 5th Dimension?

I just loved Marilyn McCoo’s voice. I still do; she’s one of the most underrated pop singers ever. And she was just so damn pretty and stylish. A few years later was the debut of The Mary Tyler Moore Show, and during that first season, I immediately noticed that MTM had totally stolen Marilyn McCoo’s look, from the flip hairdo to the mini-dresses to the boots. Hey, if you’re going to steal, steal from the best.

Email ThisBlogThis!Share to TwitterShare to FacebookShare to Pinterest
Labels: 1970, one less bell to answer, the fifth dimension

Historical note:
This was *THE* slow-dance number on the jukebox at "The Gate", a juice bar that catered to a predominantly-male clientele, at the then-deliciously-naughty Grand & Olive intersection.