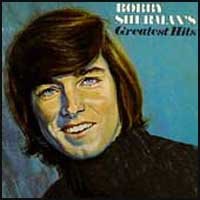 Much like the Dave Clark 5 oh-so-briefly usurping The Beatles in popularity, Bobby Sherman had one quick moment where he almost took my attention away from David Cassidy. Yes, Mr. Sherman had Top 40 hits 2 years before David Cassidy blossomed, but it wasn’t until “My Awakening” that I noticed him. And then, I noticed him only because he re-tooled his image into a Poor Man’s David. Whereas David wore pookah shells around his tawny neck, Bobby wore velvet chokers. David’s luxurious shag blew free in the Southern California sun while Bobby’s new David-esque do was highly lacquered into place. But Bobby had racked up enough ultra-catchy pop hits to garner a Greatest Hits album (optimistically subtitled “Volume 1”) by the end of 1971, and when Mom purchased said album for me at the local IGA grocery store, I was beside myself with happiness at the expansion of my record collection.
Ultra-charming Bobby Sherman in satin fringe doing "Easy Come Easy Go."
.
at 10/26/2006